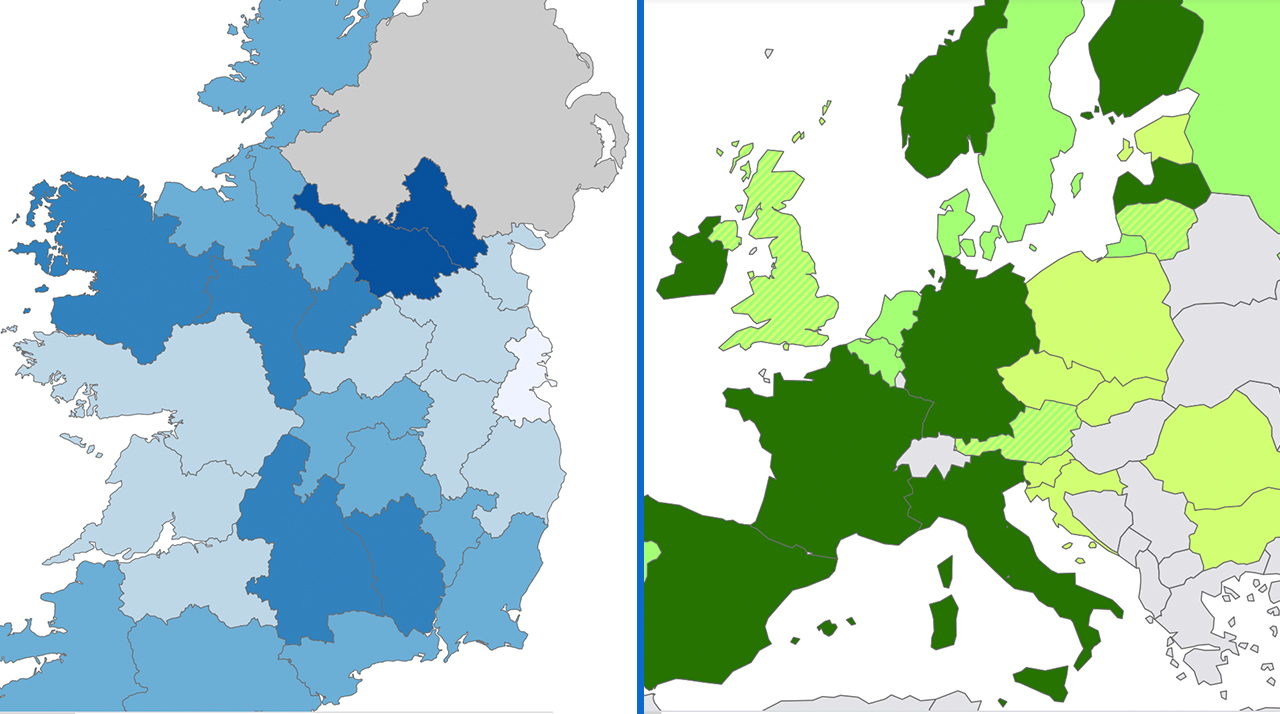 The relevance of the bioeconomy

The bioeconomy has been acknowledged as an important contributor in achieving a sustainable and resilient economy. Its significance in terms of social aspects is also recognised, along with its environmental credentials, particularly when linked to the circularity– the circular bioeconomy. Many countries across the EU have developed strategies at national level to proactively support its development. Ireland’s national policy statement, developed in 2018, was led by the Department of the Taoiseach. Its implementation is overseen by the Bioeconomy Implementation Group, which is co-chaired by DAFM and the Department of Environment, Climate and Communications (DECC).

In two maps we will show (a) the development of national bioeconomy strategies in Europe, and (b) employment in the bioeconomy in Ireland as a share of overall employment as one measure of its significance.

The European Commission produced its first bioeconomy strategy in 2012[i].  It was based on defining the bioeconomy as “the production of renewable biological resources and the conversion of these resources and waste streams into value-added products, such as food, feed, bio-based products as well as bio-energy”.  This was reviewed and updated in 2018, as more knowledge was obtained on the benefits of the bioeconomy and the challenges faced in realising its potential.  The revised strategy views the bioeconomy more widely, reflecting a view that the potential contribution of cities to the bioeconomy remains largely unexploited and includes consideration of the services provided by the bioeconomy also[ii].

Across Europe, individual member states are at different stages of development. This map shows the member states that have developed national and regional bioeconomy strategies to date.  Ireland, having developed a national bioeconomy policy statement in 2018, is clearly on the map.  The map however belies differences in the stage of development of the bioeconomy with some countries, e.g. Italy, having already reviewed and revised earlier national strategies.

Considerations behind the development of a national policy statement in Ireland included recognition of its potential to provide economic benefits and employment opportunities, particularly in rural areas and its contribution to climate change.  It was an important signal, nationally and internationally, that Ireland is committed to the development of the bioeconomy.

© 2022 Bioeconomy Ireland. This website has been created by the Irish Bioeconomy Network.